Nagging, as defined by Merriam-Webster, is “persistently annoying or finding fault with someone.” Josephine County Commissioners spent the better part of their meeting doing just that to Oregon’s female governor:

Commissioner Fowler said that “Governor Kate Brown had a hard year dealing with reality, she’s not a leader she’s a follower, she’s a tyrant, she’s an elitist sitting in her star chamber, you can tell she doesn’t have God in her life because she’s not humble and doesn’t submit to greater wisdom, she’s using torture (COVID restrictions) to control us, she handled the so-called insurrection at the Capitol in Salem all wrong – she should have asked the crowd to put down their hoes and pitchforks and invited them in to listen to them – thank God she can’t be re-elected!” Then they complained that “no one in Salem listens to us in Southern Oregon.”

After haranguing the Governor, they took on the Grants Pass Daily Courier in rambling complaints about how people don’t trust the Courier anymore for local news because they don’t fact-check letters to the editor that say mean things about the Commission, they insist on having access to public records and they don’t publish anything anymore without telling people what to think about it.

Commissioner Darin Fowler said as an example of the Courier’s bias, they wouldn’t print a letter from Jay Meredith extolling the virtues of mining and the riches it could bring to the county. At this point, puffed up with self-righteousness, they declared the local paper prints things that go along with Democrats’ point of view but not conservatives. Their disquisition on the media also included YouTube, which, as reported previously had removed several meeting videos for allowing misinformation about COVID and vaccines to stand undisputed. They accused YouTube of violating their free speech rights, with Commissioner Herman Baertschiger warning that this is the “canary in the coal mine” regarding the gradual erosion of our right to say anything we please.

Proving they allow people to say anything they please, they listened to Kelly Dominguez talk about feeling tortured because she was asked to wear a mask, and Judy Hinkle went on with her weekly COVID conspiracies, including the supposed danger of vaccines and how they were making people drive off the road and hit trees. She called vaccines a “genocidal weapon” and asked the Commissioners to endorse a proclamation she wrote warning people they are actually getting “gene therapy” when they submit to vaccinations. They both called out YouTube for taking away their rights to free speech they said are under “communist attack.”

Commissioners thanked them for their comments, babbled a bit about allowing free speech doesn’t mean you agree with everything that’s said, and ignored, for the moment, their pleas to bring up their proclamation.

During the Commissions’ first meeting back in Ann Basker Auditorium, DeYoung evidently felt the occasion called for a meandering lecture about COVID that confirmed he learned nothing while sitting through Public Health Director Michael Weber’s patient debunking of COVID myths. DeYoung still believes people died with COVID not of COVID, people who died of the flu probably got counted as dying of COVID and mask-wearing, shutdowns and social distancing were put in place because the government just wanted to boss everybody around.

When they did conduct what little business was listed on the agenda, Commissioners approved matters brought to them by department heads and voted to find out who needs COVID rescue money by asking them to fill out applications telling what they lost because of the pandemic. The COVID Relief Funds Task Force has been having trouble deciding what to do with the $16.9 million allocated to the county to help those who sustained losses as a result of business shutdowns. Southern Oregon Economic Development Inc. (SOREDI) will be taking applications on their website and screen applicants, making sure they qualify for the funds under the funding guidelines before making recommendations.

At the end of the meeting DeYoung and Fowler, once again utilized their live streamed public meeting to air more of their personal grievances, none of which were listed on the posted agenda. Is this a violation of the Brown Act? 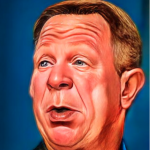 For Republicans in Oregon, a merge with Idaho looks better than ever.

Republican Party of Oregon’s Chair, Sen. Dennis Linthicum, who’s also involved with the Greater Idaho project, said during a call-in to KMED’s Bill Meyer Show Tuesday morning he and his wife visited the “audit” in Arizona and is convinced Oregon’s elections are suspicious and should get the same treatment. Except for the election he won, of course.

During Josephine County Commissioner Herman Baertschiger’s call into Meyer’s Show Tuesday, he proclaimed Oregon legislators “the worst in history” and said he’s making a list why.

“Oregon’s the most liberal state in the union” he lamented after the legislative session ended with a flurry of bills that make right-wing Republicans cry.

“They even made our state song gender neutral!” Baertschiger complained.

He denounced all legislation that makes living in Oregon as an illegal “alien” a bit more comfortable, decried the legalization of drugs and previous legislation allowing teens to seek medical care without a parent’s consent, grumbled about the high taxes on alcohol, said clean energy will bankrupt us, whined about gun safety legislation, calling it an erosion of gun rights, moaned about giving Black farmers incentives, denounced their favorite foil, Sen. Jeff Golden, for his environmental proposals and railed about the Republican legislators who went along with the liberal agenda.

Meyer said the Idaho merger should be looked at more seriously now because “we in Southern Oregon don’t have a voice here” while speaking to the morning drive radio audience tuned in to hear the latest right-wing rant. Baertschiger said Democrats in Salem think they’re invincible, but their support will fray if they stay on their liberal bent. He blamed Gov. Kate Brown for letting the legislature run wild. “They knew she’d go along with anything they wanted.”

Baertschiger claimed Gov. John Kitzhaber wouldn’t have gone along with much of the legislation passed this session. “I used to work with him. He wouldn’t have put up with it.”